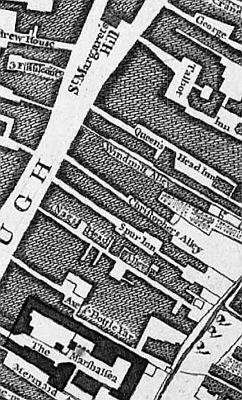 The borough of Southwark, more especially the High-street, was for many ages the only entrance into London from Kent, Surrey, and Sussex, and the chief road to and from France, and the shrine of St. Thomas à Becket at Canterbury. Thither, in times before the Reformation, pilgrims resorted by thousands every year: hence it is not surprising that Southwark became celebrated for its inns, which, from the accommodation they afforded to travellers, brought no inconsiderable profit to the inhabitants of this part of the metropolis.
Stow, in his Survey (first published in 1598), says: “From thence (the Marshalsea) towards London Bridge,
VOL. I.
on the same side, be many fair inns for receipt of travellers, by these signs: the Spurre, Christopher, Bull, Queen's Head, Tabard, George, Hart, King's Head, &c.” Of these inns mentioned by the old chronicler, the Spurre, the Queen's Head, the Tabard (Talbot), the George, and the King's Head still exist as inns for travellers. The Tabard (or Talbot) is the most celebrated of these hostelries, and is renowned in Chaucer's verse as the place where he and the nine-and-twenty pilgrims met, and agreed to enliven their pilgrimage to the shrine of St. Thomas à Becket at Canterbury by reciting tales to shorten the way. The date of the Canterbury Pilgrimage is generally supposed to have been the year 1383; and Chaucer, after describing the season of spring, says: “Befelle, that in that seson, on a day, In Southwerk, at the Tabard as I lay, Redy to wenden on my pilgrimage To Canterbury, with devoute corage, At night was come into that hostelrie Well nine-and-twenty in a compagnie Of sondry folk, by aventure yfalle In felawship; and pilgrimes were they alle, That toward Canterbury wolden ride. The chambres and the stables weren wide, And wel we weren esed atte beste, And shortly, whan the sonne was gon to reste, So hadde I spoken with hem everich on That I was of hir felawship anon,

There is also another allusion in the following lines from a ballad, “On banishing the Ladies out of Town:”

“Farewell Bridge-foot and Bear thereby,
And those bald pates that stand so high;
We wish it from our very souls
That other heads were on those poles.”

The Bear at London Bridge foot is twice mentioned by Pepys in his Diary: “24th Feb. 1666-7. Going through bridge by water, my waterman told me how the mistress of the Beare tavern, at the Bridge-foot, did lately fling herself into the Thames, and drown herself; which did trouble me the more, when they tell me it was she that did live at the White Horse tavern in Lumbard-street, which was a most beautiful woman, as most I have seen. It seems she hath had long melancholy upon her, and hath endeavoured to make away with herself often.
“3 April 1667. Here I hear how the king is not so well pleased of this marriage between the Duke of Richmond and Mrs. Stewart as is talked; and that he by a wile did fetch her to the Beare, at the Bridge-foot, where a coach was ready, and they are stole away into Kent, without the king's leave; and that the king hath said he will never see her more: but people do think that it is only a trick.”
There is yet another poetical reference to the Bear at Bridge-foot, in a scarce poem entitled The last Search after Claret in Southwark, or a Visitation of the Vintners in the Mint, with the Debates of a Committee of that Profession, thither fled to avoid the cruel Persecution of their unmerciful Creditors. A poem. London: printed for E. Hawkins, 1691, 4to, in which the Bear is thus mentioned (after landing at Pepper-alley):
“Through stinks of all sorts, both the simple and compound,
Which through narrow alleys our senses do confound,
We came to the Bear, which we soon understood
Was the first house in Southwark built after the Flood,
And has such a succession of vintners known,
Not more names were e'er in Welsh pedigrees shown:
But claret with them was so much out of fashion,
That it has not been known there a whole generation.”

The White Lion, formerly a prison for the county of Surrey, as well as an inn, is mentioned in records in the reign of King Henry VIII, having belonged to the Priory of St. Mary Overy. It is also mentioned by Stow, and it continued to be the county prison till 1695. The rabble apprentices of the year 1640, as Laud relates in his Troubles, released the whole of the prisoners in the White Lion. It has been supposed that the White Lion was the same house that, before the building of new London Bridge, was called Baxter's Chophouse, No. 19 High-street; and in old deeds, the Crown, or the Crown and Chequers: an old plasterfronted house. The house which stood in the court beside it, and was formerly called the Three Brushes, or “Holy Water Sprinklers,” was of the time of Elizabeth; and some drawings exist of the interior, as a panelled room, with an ornamental plaster ceiling, having in the centre the arms of Queen Elizabeth, with E. R., in support of the opinion that this room was the court or justice-room in which her Majesty's justices sat and held their sessions. This is more probable than that the house was a palace of Henry VIII, and that from thence he took a trip to Bermondsey Fair with Cardinal Wolsey, and there fell in love with Anna Bullen. The house was pulled down about 1832, for making the new street to London Bridge.
Mr. Corner was by no means certain that the White Lion was the same house as that used for the county prison; for at that time, when houses were not numbered, especially if they were occupied by tradesmen, they were known by signs; from which it did not follow that they were public-houses. But Stow distinctly states that there was in the High-street of Southwark an inn called the White Lion, which was used as a prison for the county of Surrey; and during the reign of Queen Elizabeth Roman Catholic recusants were confined here. Other Southwark inns named by Stow remain, except the Christopher; but they have mostly lost their galleries and their antique features. The King's Head was, within our recollection, a well-painted half-length of Henry VIII. The Catherine Wheel remains; but we miss the Dog and Bear, which sign, as well as Maypole-alley, hard by, points to olden sport and pas time.*
London pub history directory.